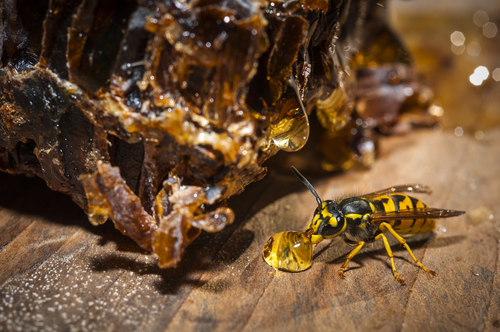 Wasps – probably one of the most annoying summertime pests to deal with.  On a good day, they annoy the heck out of Calgarians who are trying to relax on their deck or complete some needed yard work.On a bad day, they can kill a person.  Every summer there are deaths caused by wasp stings that induce an anaphylactic shock in those allergic to their venom. That’s why removing a wasp nest should be done with caution. These yellow and black-striped insects can quickly ruin any summertime fun, and even if you aren’t allergic that doesn’t mean your neighbour’s kid is so lucky.

The nests are made from finely chewed wood and saliva. They’re pale in color and have a paper-thin texture. Often, they’re spotted under eaves and garage extensions and in walls, bird boxes, and even in attics.  And just like you’re not supposed to poke a bear, you’re definitely not supposed to poke, prod, or touch a wasp nest – the end result can be deadly.  Keeping in mind that, at the height of the summer season, a nest can house thousands of wasps. A little research prior to removing a nest is always advised.

When Should you Remove a Wasp Nest?

During winter months, queen wasps become drowsy and less responsive to unwanted attention. The queen waits-out the colder months protected in her nest. She’s often at the centre of a hibernation ball.  The queen’s worker-wasps die-off over winter – leaving the queen to fend for herself until the warmer months arrive. Once they do, she lays eggs to create a new batch of worker wasps.  As the worker wasps don’t survive cold temperatures and the queen hibernates until spring, it would make sense to remove a nest over the winter months. Activity is at a minimum and the chance of being stung is greatly reduced.  But that doesn’t help you deal with the nest you found now.

The first step to take before attempting to remove a wasp nest is to establish what type of wasp lives in the nest.  Hornets and yellowjackets are both aggressive species that will sting with only the slightest provocation.  Paper Wasps are less aggressive, but they shouldn’t be underestimated during active summer months.  If a nest is located close to an area of the home or yard where pets and humans congregate, then waiting for winter isn’t an option. Instead, call in the professionals.

It’d be nice if wasps just left humans alone, but unfortunately, hundreds of Calgarians need help dealing with these pests each year. If the nest is out of the way and you can wait until winter, you may be able to deal with the wasp nest yourself. Otherwise, you should really ask for help from a local Calgary pest removal team. While wasps may not scare you, an agitated nest could bite and kill a neighbour, so it’s important to have the experts around to help.

Have a wasp nest you need remove? Call in the professionals at One Man and a Lady Bug! We’d be happy to answer any of your questions and help remove your pest-problem.