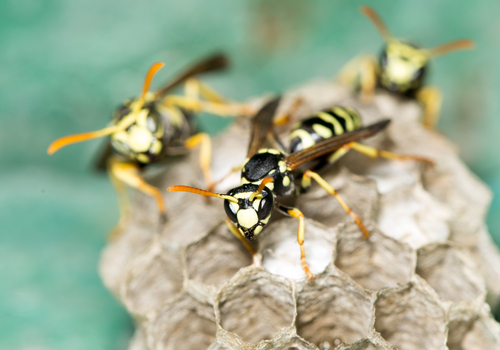 They’re back! And we’re not referring to rodeo cowboys – we’re talking about our stripped friends from the family Apoidea (Bees) and Vespidae (Wasps) – who are all set to hover above our back yard barbecues and loiter annoyingly around doors and windows: poised to sting if we fail to respect their presence and generally put a dampener on an otherwise beautiful time of year.

Bees and Wasps in Calgary

Yellow Jackets are a familiar sight around Calgary during warm summer months.  Highly persistent and with as much social manners as a starving man at a free buffet – Yellow Jackets are a varietal of wasps that just don’t know when to quit – constantly hanging around picnic areas and other social gatherings; waiting to plunge in to an unattended soda can to swim decadently in a pool of sugary liquid.  Attracted to human sweat, bright colors and the sweet smell of nectar – Yellow Jackets can be nothing more than a real pain that is only made worse by an unprovoked sting.  These wasps are able to sting multiple times and can show aggression if hampered in their attempt to secure a food source.  Nesting either below ground or at ground-level height these bothersome wasps need to be professionally dealt with to avoid multiple stings.

And if dealing with some unwanted Yellow Jackets wasn’t bad enough – the sight of a Hornets football shaped nest can induce anxiety in the bravest of us.  The real aggressors of the wasp clan – Hornets are super protective of their nest and won’t hesitate to unleash an attack on anyone who dares venture too close.  Nests are often spotted around buildings and homes, hiding under balconies and eaves and even hanging in trees.  Calgary Pest Control experts at One Man and a Lady Bug recommend exercising extreme caution around a hornets nest as this wasp’s aggressive nature and ability to release an attack pheromone makes the task of removing a nest a job for professionals.  Containing up to seven hundred hornets at the height of population – a Hornets nest should not be tampered with – and calling a Calgary Pest Management team is advised.

Bumble Bees seem quite tame in comparison to the aggressive nature of wasps. An important insect for successful pollination and an asset to agricultural and other pollination operations – removal of a nest should be done after careful consideration, as this insect’s contribution to the eco-system frequently outweighs its annoying traits.  If a nest is located close to a home or building then a consultation with a Pest Management technician regarding safe removal is a good first step.  Never attempt to remove a nest on your own – as contrary to popular belief bees can sting multiple times – a health risk that must be acknowledged.

Calgary Pest Control and Extermination Experts at One Man and a Lady Bug explain that summer doesn’t have to be ruined by wasps and bees.  Contact them today for all your pest control needs 403.262.1666