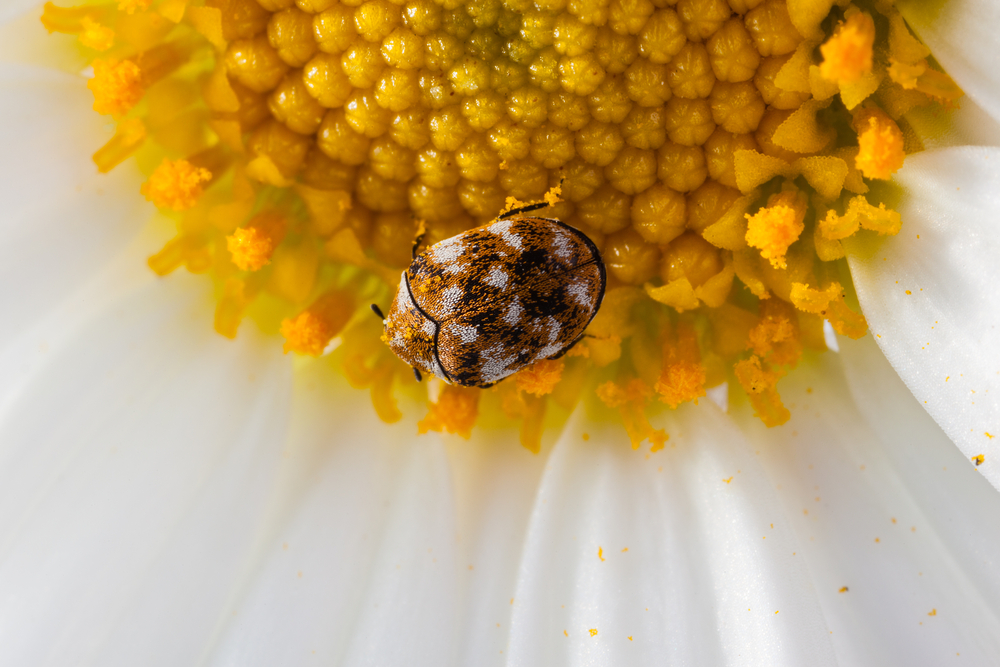 Beetles really do love to munch on just about everything. Now, not every variety of beetle takes a bite out of the same thing, but when you think about the destruction this common house and garden insect inflicts, it proves it really can eat its way in and around most objects. There are beetles that love to take a chunk out of wood and we’ve got the leaf-eating variety that can rob a tree of life in next to no time – but what about the common Carpet Beetle? What does it spend its days and nights nibbling on?

Wouldn’t you know that Carpet Beetles thrive in low humidity environments – making Alberta a big hit amongst this insect. Ranging from the Black Carpet Beetle to the Varied Carpet Beetle, Alberta sees its fair share of these insects during the fall months when, just like most other insects, the threat of an approaching winter drives them indoors to seek shelter and sustenance. But are Carpet Beetles really destructive to have around, and do they impact the health of surrounding humans and pets?

Do Carpet Beetles Cause Damage?

Carpet Beetles can cause significant damage to furniture, clothing, and household materials – making them a real bother when not controlled and eliminated. It’s not the mature, adult beetle, that causes the most damage, as it’s the larvae that cause havoc for homeowners as they feed on natural fibres – silk, wool, fur and plant material – eating their way through a home, oblivious to the mess and destruction they leave in their wake. So how do you prevent an infestation of Carpet Beetles?

Stopping Carpet Beetles at the Door

Stopping Carpet Beetles from accessing your home is important as once inside they can be tricky to control. Living behind baseboards, under flooring, and inside air ducts, Carpet Beetles can literally hide from most humans and do their best work in the dark, hiding under furniture and belongings, making spotting an infestation tricky. If you’re noticing what appear to be ‘skins’ around the edge of rooms then most likely your house is hiding Carpet Beetles and pest control intervention is required.  At One Man and a Ladybug the control and elimination of Carpet Beetles is performed with the health of humans and pets being the priority. Using environmentally stable and friendly solutions, this Calgary Pest Control company is able to restore a home and business without risking the health of humans.

Think you’re dealing with Carpet Beetles? Not sure how to prevent their destruction? Contact One Man and a Lady Bug today 403-262-1666