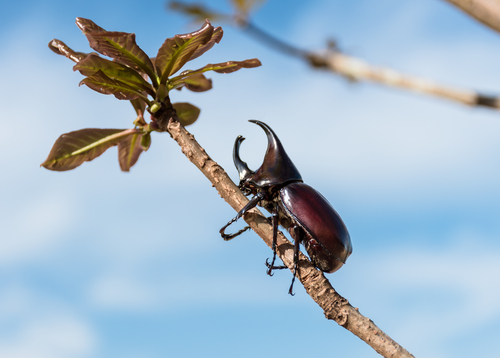 Who knew that Alberta was home to so many different varieties of Beetles!  From Carpet and Grain Beetles to Bark Beetles – spotting these scampering critters can help protect your home and yard from an infestation.

Think you’re seeing things, or did you notice a little movement from your shag carpet?  Measuring approximately one quarter of an inch long with a dark brown or black glossy shell – Carpet Beetles are a common sight in Alberta homes.  Noticing shed skins of the beetle larvae is usually the first indication of an infestation – so be on the look-out for reddish-brown skins that signal you’ve got company.  Mature Carpet Beetles feed-off animal products such as fur, feathers and wool products.  Consistently found behind baseboards feasting off lint and strands of hair – Carpet Beetles are also noticed around windows, feeding on dead insects lying on window sills and around vents.  Maintaining good house-keeping is a homeowner’s number one defense against an infestation of beetles – as without a source of food these insects will quickly move on.

Calgary Pest Control Experts at One Man and a Lady Bug explain that one of the most common beetles in Calgary and Alberta is the Merchant Grain Beetle.  Just like their name suggests – these beetles are brought in to the home through infested food purchases of grain, cereals and pasta.  Inspecting your bulk grain purchases before transferring them to glass containers with tight fitting lids is highly recommended – as once in the house these Beetles can soon take-over a kitchen and pantry.  Like most pest control recommendations – cleanliness and quick clean-ups of spills and crumbs will prevent a home from becoming a beetle’s target for food and shelter.

Pest Control Technicians at One Man and a Lady Bug don’t just help eliminate beetles from the home – they are also called-upon to control beetle activity in yards due to the attraction of beetles to Ash trees.  Referred to as Ash Bark Beetles this variety of beetle is notorious for destroying trees that have been planted in sunny areas to create shade.  Boring in to the bark of trees the beetle’s work creates sunken areas of the trunk as their attack of weakened or dying branches spreads to the trunk of trees.  Regular pruning of dying branches will help deter beetles from using these sites for breeding – and branches that show infestation should be cut back immediately to prevent further spreading.

Beetles may be small but they are capable of causing significant damage to trees and a home.  If you suspect that you have an infestation of beetles – contact a Calgary Pest Control team today.