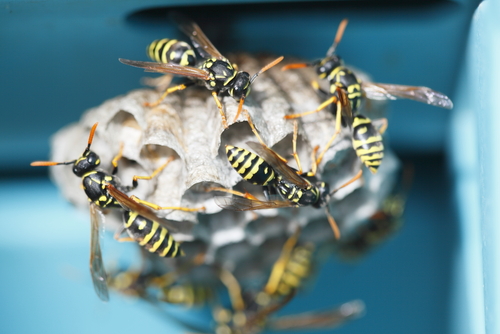 Calgary’s warm summer has certainly presented some challenges when it comes to controlling bugs.  Alberta’s dry, warm days not only have caused drought conditions for farmers, but have contributed to a marked increase in bug activity – namely Wasps and Bees.

The summer of 2015 saw farmers praying for rain and pest control firms tackling unusually large wasp colonies – as the dry, hot days heightened bug populations which brought wasps out in search of easy food.  Alberta has always had its fair share of sting-laden wasps; earning themselves the reputation of being one of the most despised bugs around – capable of stinging their victims multiple times and having tenacity that matches their sting – wasps should be handled carefully as an aggressive response from humans can trigger wasps to release an alarm pheromone that draws more wasps towards the aggressor.  From Yellow-Jackets, Paper Wasps and Baldfaced Hornets – late fall can see an increase in numbers as these pests up their scavenging activity in preparation for winter.  Being mindful of their presence and taking steps to keep them away from areas of human activity will help reduce the risk of late season stings.  In the late fall worker wasps feed off fermenting, rotten fruits and vegetables, making them ‘drunk-like’ and prone to bouts of stinging. Though worker wasps retreat to the nest to die during the winter months – the Queen Wasp survives the cold temperatures by building a protective single-cell nest.

Is Bee Season Over?

Calgary Pest Control Firm – One Man and a Ladybug – explain that though the number of warm days and nights are fading there may be a sudden increase in Bees around town.  In the late fall drone bees are driven from the hive to die, either from starvation, predation or exposure.  This driving out of drones is to make room for ‘winter’ honey bees that are born at the end of summer and are needed to heat hives and nests throughout the winter months.  A winter honey bee has a different blood protein than the summer bee and is fatter and hardy – making them able to withstand dropping temperatures.  Bumble Bees don’t remain active throughout the winter months, as worker bees’ die-off at the end of fall and only the Queen Bee survives by building a nest and hibernating alone until spring.

One Man and a Ladybug is a Calgary Pest Control and Extermination Company that focuses on providing environmentally safe solutions for pest management.  Call today for an appointment – ask about monthly specials – 403.262.1666