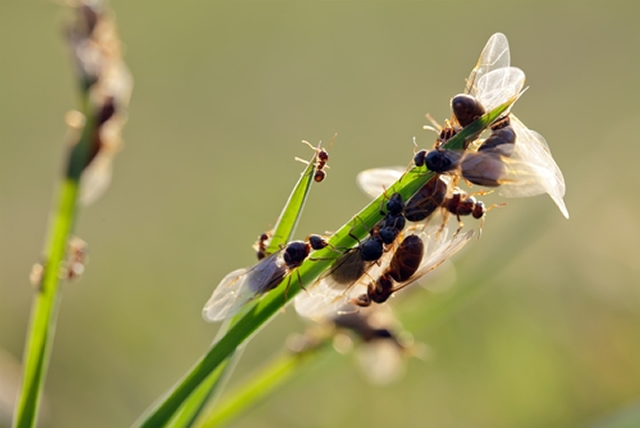 Ants have always claimed their territory in Calgary yards and parks; and though they can be annoying, they’ve never gained the same amount of attention as this late summer’s invasion of Flying Ants.  Calgary Pest Control Experts – One Man and a Ladybug – have been managing the latest summer nuisance and offer some advice on how to live with these critters.

Observing Flying Ants outside, hovering around high structures like chimneys or prominent trees, is a normal sight and shouldn’t raise concerns of an increased risk of infestation.  However, when Flying Ants are seen entering or leaving a home, chances are high that a colony of non-flying ants already exists.  Carpenter Ants – a common inhabiter of Calgary homes – and Pharaoh ants have the ability to build nests in homes and buildings and have a number of winged ants in a colony.  Flying Ants consist of both male and female ants – with the female being the larger ant and the male dying off after mating.  It is believed that periods of intense rain followed by extreme heat prompt these forms of ants to appear – with some people believing the Flying Ant Myth that they appear on a specific day to mate.

The good news is that Flying Ants aren’t that interested in humans – or your gardens vegetation.  They are focused on each other, with the intention of mating, after which the female goes off to find adequate shelter for the cooler months approaching.  They are often noticed in the late afternoon and early evening; giving them time to mate without too much exposure to predators.  This year Calgary’s summer has provided perfect climate conditions for Flying Ants – hence the noticeable numbers and resulting calls to Pest Management Firms in Calgary.  Flying Ants will only bite when disturbed – and really only have a short ‘annoyance period’ due to their sudden presence for mating.

If you are noticing a difference in Ant activity either in or around your home and business – now is the time to contact One Man and a Ladybug for a complete evaluation.  Providing extermination and pest control options that are human, pet, and environmentally friendly – contact this Calgary Pest Management Firm today 403.262.1666