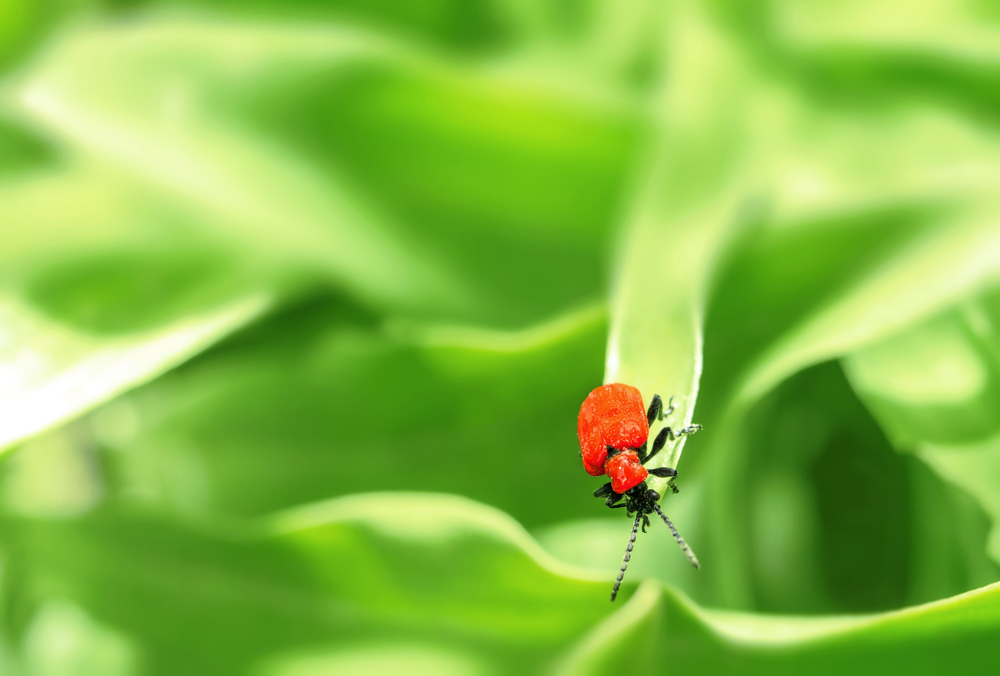 A beetle that has caused havoc in gardens in Eastern Canada since the 1940’s, the Red Lily Beetle is somewhat of a newcomer to Prairie backyards, but is nonetheless making a name for itself due to its ability to destroy varieties of lily plants. Bright red in colour with a rectangular shaped body, black legs and head, and an appetite that can shred through cherished plants – this is one beetle that you don’t want to see sunning itself in your yard. Originating from Asia and Europe and sometimes referred to as the Scarlet Lily Beetle, Lily Leaf Beetle, and its official name of Lilioceris Lilii, the Lily Beetle should not be mistaken for the friendly ladybug, with its distinctive red body and black dots. If left to its own devices, the Lily Beetle can quickly destroy vegetation, including your healthy plants.

Adult Lily Beetles hide out in soil over winter and emerge in warmer temperatures, ready to eat and lay eggs. Checking the soil of newly purchased plants is often the way these beetles and their larvae are spotted, and provide an opportunity to remove unwanted bugs before planting bulbs and plants into your garden. Monitoring activity of insects on and around lily plants is required throughout the growing cycle as the Red Lily Beetle can be easily seen hanging out on leaves and removed before damage is done.

Though the beetle itself isn’t exactly the best camouflaged bug in the garden, it manages to reproduce rapidly by laying eggs on the underside of leaves and covering the eggs with frass (excrement), which closely resembles bird droppings. The frass acts as a protective shield against the elements and other foraging insects, often hiding up to 12 eggs at a time and appearing in clumps along the middle of a leaf’s underside. Removal of these clumps is essential to preventing the larvae from feeding on leaves and maturing to go on and destroy further plants.

Even if you’re not seeing the bright red body of the Lily Beetle perched on a Lily plant or the sticky clumps of frass attached to the underside of leaves, there is a very clear sign that Lily Beetles have been at work, and that’s holes in plant leaves. Large, gaping holes in the centre of leaves is clear indication that you’re dealing with a Lily Beetle infestation that will turn the leaves black over time and cause them to drop – resulting in just the plant stem remaining.

If Lily Beetles had you spending most of last summer checking plants, get the qualified technicians at One Man and a Ladybug to come out and inspect for unwanted pests. Early detection and intervention means plants stay healthy, and you get to have a relaxing summer.